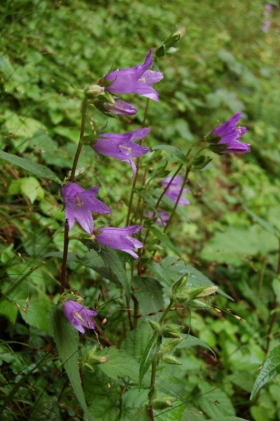 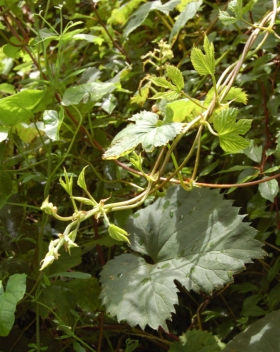 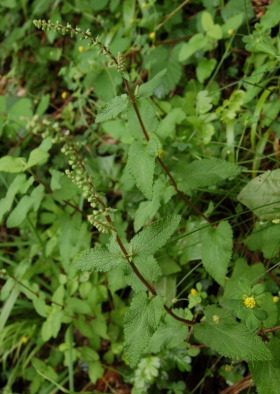 On July’s Edible Landscape outing we spotted various ‘feral’ fruits – feral as in once domesticated but now gone wild. Gooseberries and red currents are considered native wild woodland species and you do find the odd specimen in the woods around Chalford. But then, more often than not these are likely to be escaped cultivated varieties. these can be seedlings spread by thieving birds but also when you find such examples a closer inspection of the apparently wild location will often reveal the remains of a dwelling, the outline of stone wall in the undergrowth, indicating that the woodland thicket was maybe once a garden. Wild strawberries, a plant of the woodland edge, can often have a similar pedigree. But with cross fertilisation and the continual interaction between human and ‘natural’ systems there comes a point when the concept of wild and domesticated begins to loose any meaning.

This time of year another fine edible woodland edge plant is the native and wild nettle leaved campion. Like all campion species has edible flowers and leaves. This year saw a particularly fine crop along the edge of Oldhills wood.

Another wayside plant that has an equally questionable ancestry as the above fruits is the (wild) hop. Those who know more than I say that although the Wild hop was once a common native  of southern England because it was so widely cultivated in the past any you find growing in the hedgerows these days are likely to be descended from the domesticated variety. As well as the flowers being used for brewing beer the young shoots of hops can be eaten, lightly steamed like a poor mans asparagus. They can be actually quite good, with a sweet and subtle hoppy flavour but I must say I’ve never felt so poor as to spend the time finding enough of the rather thin shoots to make a starter for one even.

Just along the road from the hops on the same sunny woodland edge that the strawberries were growing we found Wood Sage. Although it’s leaves do resemble those of the kitchen herb sage it unfortunately is no substitute for it. But interestingly the aroma you will detect if you crush the leaves between your fingers is that of hops! And it was indeed used in the past as a flavouring for beer.